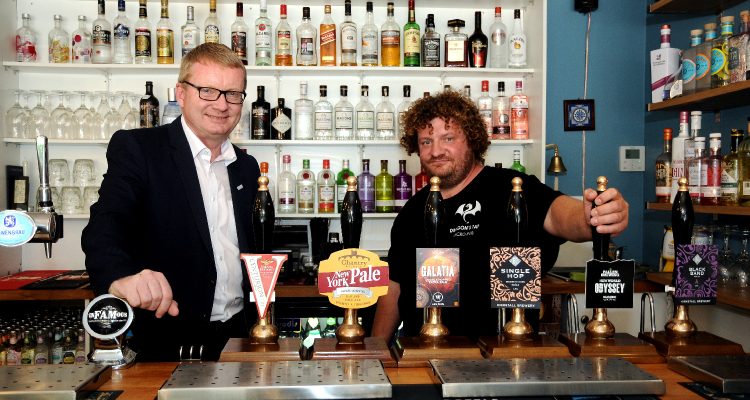 Working in a classroom can be enough to turn even the most dedicated of teachers to drink, but a former languages tutor has tapped into his love of the continent and craft beer to breathe a new lease of life into a former Rotherham-based DIY shop after tapping into help from alternative lending provider Finance For Enterprise.

After spending time working as a teacher, Simon Evans called time on life in the classroom, in favour of following a lifelong dream of running his own micropub. Inspired by the growing popularity of small independently owned bars, he began making plans to create a new home for lovers of craft beers in his home town of Rotherham, drawing on more than a decade of experience working in the drinks industry.

Simon first developed an interest in fine wines and independent breweries when he secured a job in an exclusive wine shop to pay his way as a student. He spent much of the following decade balancing his studies, which saw him earn three degrees including two masters qualifications, alongside learning about rare and unusual wines, which were sourced from across the world.

He began noticing a growing demand from discerning drinkers for craft brews and locally produced beers. As time progressed, he also started to notice once empty shops being transformed into cosy, independently owned micropubs and inspired by their success, Simon began developing plans to create his own vision of the perfect pub.

Encouraged by the success of Rotherham’s first micropub, the Wath Tap, and feeling that he had spotted a gap in the local market, Simon spent nearly a year meticulously writing and preparing his business plan, carefully examining whether his idea would be viable.

When a former DIY shop, at the Stag Roundabout became available, the aspiring entrepreneur realised he had found the perfect premises for his new venture. Only one thing stood in the way of his dream micropub: Finance.

Unable to raise the funds needed by himself, Simon approached alternative lending provider Finance For Enterprise for help. Working with a dedicated investment manager, he was able to secure the vital funds needed to secure the premises and invest in the vital equipment and renovation work needed to make his dream a reality

Within just a few weeks, the empty shop had been transformed. Modelled on a French style bistro, featuring an eclectic range of furniture and six different hand pulled beers for customers to sample, the Dragon’s Tap fired into business.

Since that time, Simon’s micropub has gone from strength to strength, quickly building up a loyal client base. Such has been the popularity of the pub that it was crowned as Rotherham CAMRA’s Autumn Pub of the Season and has even secured a place in the Good Beer Guide.

Simon has been keen not to rest on his laurels either. Since opening the Dragon’s Tap he continued to invest in the premises, transforming the upstairs of the building into a live music venue, which is used regularly for private functions and he has continued to invest in expanding the range of drinks on offer to include an eyewatering selection of more than 60 gins, as well as a changing range of six real ales, four craft beers and ciders.

“As a student I had spent time working in a bistro in France and loved the relaxed, friendly environment. I wanted create something similar, but adding a Yorkshire twist to the concept. During the decade I spent in the North East, the craft beer revolution really took hold and as micropubs began opening throughout the region, I began to think there may be an opportunity to bring the concept to Rotherham.

“Setting up the business was a leap of faith. It felt like I was on a bungee rope! But I knew that if the micropub was going to be viable, a cash injection was vital, enabling me to transform the empty shop into my dream pub. Many banks are reluctant to lend to new businesses with no proven trading history, and so I decided to contact Finance For Enterprise.

“Working with an investment manager, they have been incredibly supportive and without their help, I suspect I’d still be wondering ‘what if’. Working with an investment manager gave me confidence that the business was viable and as a result, the Dragon’s Tap has come a very long way in a short space of time. That wouldn’t have been possible without the help I’ve received and I’m beginning to explore new ways of growing the business further.”

“After meeting Simon, it was clear he had spent a lot time planning and researching his idea. He presented one of the most thought out and considered business plans I have ever seen in all the years I have worked in the finance sector, which mean we were able lend him the vital funds to get his business off the ground. Since opening his business, the Dragon’s Tap has gone from strength-to-strength, not only creating a number of new jobs and it has quickly established itself as a very popular venue in Rotherham.”

“As an alternative lending provider, Finance For Enterprise are often able to step in when lending from traditional high street banks is not possible. Banks are often reluctant to support new business ventures, particularly when they have no proven trading history, but we always take time to understand the business and we felt confident that Simon was onto a winner.

Finance For Enterprise provides a range of tailored loans, aimed at helping SMEs throughout the Sheffield City Region and North East Lincolnshire. The company acts as a fund manager for the Northern Powerhouse Investment Fund and Start Up Loans UK and provides business loans up to £250,000.